What we like most about Alan's story is that he's had a broad set of experiences that made him into the coach he is today. From being a college player, to playing 'overseas', to coaching at his Alma Mater, to coaching Team USA and finally getting back to big successes at Long Beach State. During all that time continuously working on his craft.

Even though 'buy-in' and culture will be overarching topics in this masterclass there is so much more that we talked about. How our game should be positioned as a sport, possible tweaks to our rulebook, what style his ultimate starting six should be playing, why his time away from college coaching was fundamental into his current style of coaching and so much more...

Take your time getting through all this, split it up if needed. You'll probably need a little over an hour.🙂

You could start with clicking the clip below, that will get you to the press conference minutes after Long Beach State became the 2019 NCAA National Champion and will be a perfect warming up for Alan's entire masterclass.

(our first 2 clips have some sync issues, sound is on point though)

Why did you commit to become a professional volleyball coach? What pushed you towards that decision?

Well, I don't ever think that I should've become a coach, to be honest with you. I actually tried probably not to become a coach.

I grew up in a coaching family, not of volleyball, but of soccer actually. So my parents moved to the United States from Northern Ireland in the sixties. And I'm the youngest of three boys. And we were a big, big soccer family.

So my dad coached soccer and started a soccer club. So I was around, you know, coaching a lot. I was the son of a coach. On most of the teams I played on, I was the captain.

And what I didn't realize when I was young, is that I was kind of grooming myself without noticing to probably get into coaching.

When I finished playing, I actually got offered a job coaching at a two year junior college, I had never coached at any level other than coaching some young kids.

So I did that and I really enjoyed it. I did that for two years, we had some pretty good success.

Then the position of assistant coach opened up at the university that I had played at Long Beach State, where I coach obviously now. So I took that job to see if I liked it. And I also took it because it was going back to my school, my Alma Mater and I had passion about that.

I really did enjoy it. And then at that point, really, it just took off.

I don't really think I ever made a decision. And what's funny is I tell people this all the time, I've never really tried to get a coaching job. I've never sought out a job and really applied to go get it without knowing anything about it first.

So I didn't take the normal path that most people did. So I find myself very fortunate to kind of have the upbringing I did and then take advantage of the opportunities that kind of came along.

What advice would you give yourself as a starting coach? An advice that is obvious now, but that you had to develop over the years.

I think going off of kind of the last answer of how I got into coaching, it also put me in a situation where, because I wasn't trying to get into coaching, so I wasn't seeking assistant coaching positions or to be around incredibly high level coaches all the time and maybe have 5 - 6 different experiences with different coaches and mentors.

I feel like I put myself in a situation that I had to work extremely hard to find that help and to find growth and find a way to continually commit to the idea of getting better all the time.

Because I found myself consistently, from a very young age, in the head coaching position.

So because of that, I didn't have a tremendous amount of mentors around me. I had to go out and search for them.

So my advice would be; Sometimes the quickest route to the head coaching jobs is not necessarily the best route.

The best route is being around the best coaches and the best programs and culture you can immerse yourself with and really invest in relationships. Good coaches, good people, good organizations and learn why they're good.  Without having to be the person, making the call all the time at the top. Because a lot of times you learn, not only what's the good, but a lot of times you learn things that you would never do.

If you're a smart young coach and you're on a staff, you're not going to agree with everything every head coach does or how he handles a player, he handles a situation.

But you learn from different coaches, what you like and what you don't like. And that's how you kind of build your toolbox as a coach.

So I would push two things.

Spend as much time around the best coaches and the best organizations you can be part of.

And the other one is be a constant learner and find ways to get better...

whether it's investing in professional growth opportunities, even like what we're doing today, listen to some of these interviews and being part of conventions and coaching clinics.

But also finding time to read, there's lots of great books out there by wonderful people, whether it be coaching or leadership or biomechanics, but constantly find time within a day, within a week, within a month, within a year that you're going to set time aside to try to continue to grow.

Because too many young coaches, specially that were good players, know it all too early. At least they think they do. 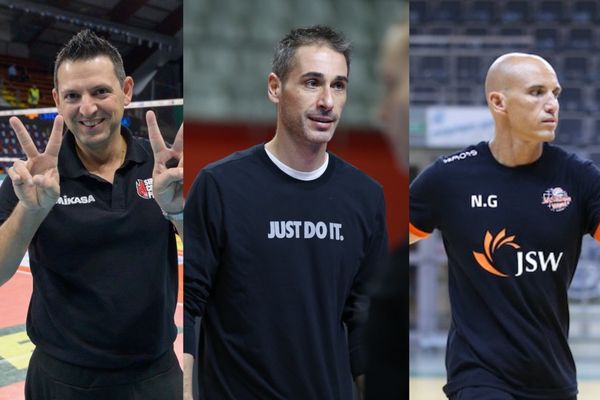 We are back with the second part of this weeks 'On the court' series. We sent out 3 questions about physical development in volleyball to 3 top experts in the